News and Articles    How did LUMI end up in Finland?

How did LUMI end up in Finland? 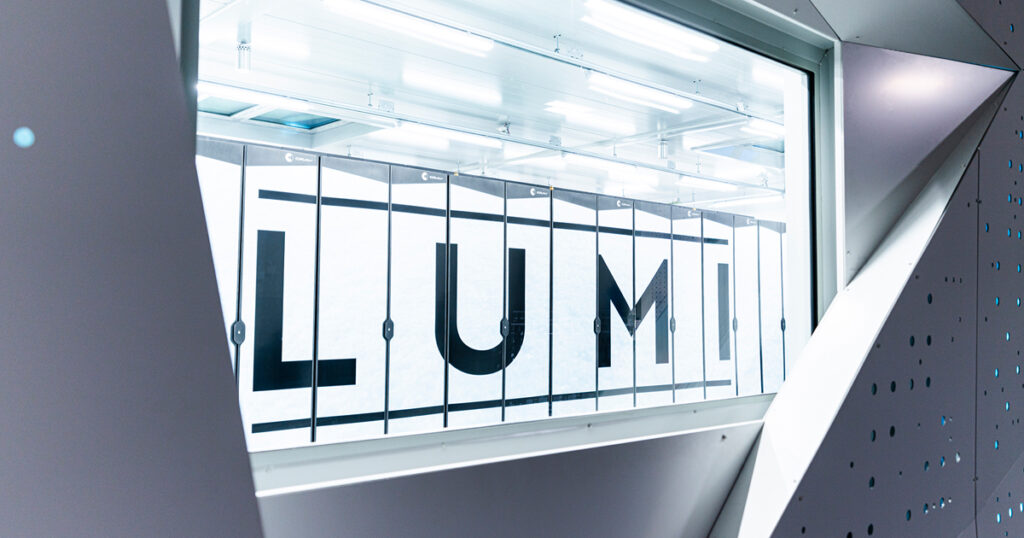 LUMI supercomputer’s second installation phase is currently ongoing at CSC’s data center in Kajaani, Finland. Soon researchers across academia and industry will have an unforeseen tool – Europe’s fastest supercomputer – to tackle questions around issues that affect us all such as climate change and more efficient cures for diseases. There is more and more need for research-based policy-making and knowledge to strengthen resilience and democracy in the society. European collaboration is now more important than ever, and EuroHPC JU is a key initiative to build a solid basis for European competitiveness, growth, jobs and wellbeing.

LUMI is unique in many ways: it is an endeavour of 10 countries, investing together in an HPC ecosystem and demonstrating a paradigm shift, that showcases excellence and cost-efficiency based on long-term HPC and scientific tradition and expertise within the consortium countries. CSC’s data center in Kajaani, where LUMI is placed, is also one of the world’s most energy- and eco-efficient data centers.

But what is the story behind LUMI, how did it come to Finland? Getting the LUMI supercomputer to Finland was no forgone conclusion. Although the LUMI consortium, led by CSC, officially joined the competition to get one of the three EuroHPC pre-exascale supercomputers to Kajaani in 2019, the background work began years earlier.

CSC has been actively contributing to shaping European e-infrastructure policy for more than ten years, carrying out concrete projects, such as the PRACE HPC research infrastructure. During these years CSC established its status in HPC expertise, as well as world-class technical skills and knowledge. CSC was also networking both with EU decision-makers and with other computation centers around Europe, growing the reputation as a reliable partner. At national level, CSC has systematically built competence and knowledge in computational science for 50 years.

The EuroHPC was launched with a communication by the European Commission in 2017, which laid the foundations for boosting EU competitiveness in the fields of data infrastructures. This eventually led to the 2018 EuroHPC declaration, which Finland also signed, and to setting up the EuroHPC Joint Undertaking. This was a significant step in strengthening the European HPC competence.

Finland joined the competition for the first phase of EuroHPC as a black horse candidate. Spain and Italy were considered the countries that would be most likely to host the first EuroHPC flagship computers. Nevertheless, the LUMI consortium came as a paradigm changer and as a challenger, and eventually proved to be the strongest in the whole competition.

Building the LUMI consortium was a significant joint effort in itself. It required plenty of coordination, negotiation skills, and perseverance, but thanks to the partnership networks built by CSC throughout the years, we already had many potential partners. From day one, the consortium wanted to be known for openness, inclusiveness and collaboration. It was wonderful to see that the countries in the consortium were ready to commit to a shared infrastructure. A strong technical vision of a supercomputer based on modern GPU processors of the 2020s convinced the representatives of the HPC centers in the consortium countries, and they advocated to their ministers on behalf of membership in the consortium. This is the first time in the history of HPC, that several EU countries are ready to invest in a supercomputer that is set up outside their own borders.

The vision on the technical architecture of LUMI, an extensive LUMI consortium, and the thinking, that it is best to place supercomputer where it is most environmentally friendly and cost-effective to do so, along with a professionally written excellent application, led to LUMI getting the highest evaluation scores in the EuroHPC competition. Eventually, Europe’s flagship computer came to the CSC data center in Kajaani with the help of investments by the EU, the Finnish government, and nine other countries.

Shared value base, top-notch skills and knowledge, and sustainability thinking

The LUMI consortium has a strong foundation based on shared European values and sustainability thinking, which is completely new in the field of high-performance computing. We wanted to point out that for the sake of sustainable development and for the best of European taxpayers, the public interest is a more important consideration than thinking about whose backyard the computers are located in.

These shared values, together with CSC’s vision on the HPC and data ecosystem that supports the development of Europe’s digitalisation and data economy, are something that we have wanted to advance extensively both at national and EU level.

The communications emphasised the overwhelming strengths of the consortium: the top-notch technical and HPC competence of the consortium partners, the tradition of openness and collaboration of the partner countries, and support for the climate goals of the EU. This has also enabled decision-makers to see what is actually needed for promoting digitalisation, how the placement of energy-intensive industry affects how climate goals can be reached, and what data economy means on a concrete level. The fact that we had two Finnish ministers as our spokespersons Sanni Grahn-Laaksonen, the Minister of Education and Culture of the time, and Mika Lintilä, the Minister of Economic Affairs, undoubtedly increased interest toward our consortium, and showed that we have strong political support from the Finnish government. A credible and strong brand sent a powerful message to our competitors that we are serious about this.

Success in the EuroHPC competition placed CSC among the world’s biggest and most important HPC centers at one go. The procurement project of the LUMI system was even more than successful, and instead of the expected 200 petaflops, the HPE Cray EX supercomputer, became a 550 petaflops system which, on paper, beat the world’s fastest computer at the time, the Japanese Fugaku system. At the time of this writing, the LUMI ranking on the top500 list is not yet known, but it is expected to be among the five most efficient computers in the world. Other projects that are subordinate to the LUMI programme, such as the construction project of the data center, the Puhuri project, in which a user and resource management system was built, the LUMI user programme, and the installation project have all been successful.

Soon it will be time both to celebrate the great listings, and to leverage the considerable investment made in all fields of society across Europe. The inauguration event for LUMI will be held on 13 June 2022, and it will be possible to follow the event via live stream. Follow LUMI’s website and social media channels for further information about the event’s live stream!