News and Articles    One of the world’s mightiest supercomputers, LUMI, will lift European research and competitiveness to a new level and promotes green transition

One of the world’s mightiest supercomputers, LUMI, will lift European research and competitiveness to a new level and promotes green transition

One of the most powerful supercomputers in the world, LUMI, will start its operations in CSC’s data center in Kajaani, Finland, next year. The peak performance of LUMI is an astonishing 552 petaflop/s. To date, the world’s fastest computer, Fugaku in Japan, reaches peak performance of 513 petaflop/s. When LUMI’s operations start next year, it will be one of the world’s fastest supercomputers.

LUMI is a unique European endeavor, with ten European countries and the EuroHPC Joint Undertaking (EuroHPC JU) investing in one joint system. It is set to boost research, employment, and competitiveness throughout Europe. The procurement process of LUMI is now complete, and the system supplier is Hewlett Packard Enterprise (HPE), providing an HPE Cray EX supercomputer with next generation AMD EPYC™ CPUs and AMD Instinct™ GPUs. In addition to the remarkable computing power, LUMI is also one of the world’s most advanced platforms for artificial intelligence and it will be one of the world’s best known scientific instruments throughout its lifetime.

– Today we mark an important step forward in the realisation of the European High-Performance Computing strategy. The pre-exascale supercomputer hosted by the LUMI consortium will be among the top 5 in the world. Together with the other EuroHPC pre-exascale and petascale supercomputers that will be deployed in 2021, the LUMI supercomputer will help Europe’s public and private users address many daunting research and innovation problems across different areas from weather and climate change through cybersecurity to drug discovery and personalised medicine. LUMI supercomputer aligns the Digital and Green Deal policies of the European Commission, using 100% renewable carbon neutral energy. Moreover, the heat generated will provide 20 percent of the district heat of the area, being one of the most efficient supercomputers in the world, says Khalil Rouhana, Deputy Director-General of the Directorate‑General for Communications Networks, Content and Technology (DG Connect) of the European Commission.

– Once operational in mid-2021, the LUMI supercomputer will be one of the most competitive and green supercomputers in the world! Such a leadership-class system will support European researchers, industry, and public sector, in better understanding and responding to complex challenges and transforming them into innovation opportunities in sectors like health, weather forecasting, or urban and rural planning, says the Executive Director of EuroHPC Joint Undertaking, Anders Dam Jensen.

– We are committed to supporting the European High Performance Computing Joint Undertaking (EuroHPC JU) to seize opportunities in next-generation supercomputing and bolster R&D in science, advance innovation, and unlock economic growth. We are honored to continue collaborating with EuroHPC JU, and through our partnership with AMD, build one of the world’s fastest pre-exascale supercomputers for Europe.”, says Peter Ungaro, senior vice president, and general manager, high-performance computing (HPC) and mission critical solutions (MCS), HPE.

– The reliability of CSC and Finland made the European Commission and ten partner countries to invest in one pan-European high-performance computing and data management infrastructure in Finland. We have to keep up the excellent collaboration in order to maximize this investment to benefit society on a larger scale, says Permanent Secretary Anita Lehikoinen from Ministry of Education and Culture, Finland

LUMI is an investment of over 200 million euros, covering the whole lifecycle of the system. It will lift Europe to the forefront of high performance computing (HPC) and research. Exploiting the potential of the data economy is crucial for Europe’s competitiveness.

– The investment will make CSC data center one of the world’s largest players in the field of HPC. The joint procurement process with the EuroHPC Joint Undertaking and ten European countries has proceeded on schedule despite the global pandemic, thanks to the vast know-how of the LUMI consortium and the excellent collaboration. LUMI’s astonishing computing power combined with a highly modern artificial intelligence platform and data management infrastructure will help European researchers tackle unforeseen research challenges, says CSC’s Managing Director Kimmo Koski.

The uptake of HPC will remarkably increase the competitiveness of small and medium-sized enterprises (SMEs) in Europe remarkably. Up to one-fifth of LUMI’s resources will be available for industry and SMEs.

– The technology we are using is strongly based on mathematical modelling: analyses, artificial intelligence, simulations, and optimization. Therefore, powerful computing capacity and data management infrastructure are of the utmost importance for us. The LUMI infrastructure will open up entirely new possibilities for us, which we may exploit, says Anna-Maria Henell, CEO of Disior Ltd. Disior is a Finnish company developing software for analysing medical images in 3D. 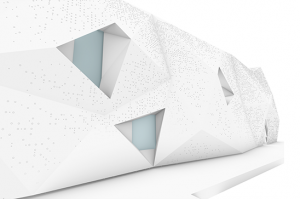 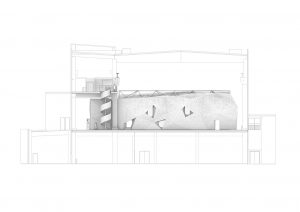 Caption: This is how the LUMI data center will look like. Copyright: Synopsis Architects Ltd. and Geometria Architecture Ltd.

Supercomputers enable the fight against pandemics and help resolve unforeseen research questions
LUMI’s top-notch computing resources are needed in leading-edge research in a wide range of data- and computing-intensive fields. Examples include climate, pharmaceutical, and artificial intelligence.
LUMI will also have a fast-track for urgent computing in time- and mission-critical simulations. This kind of simulation might be, for example, related to a large epidemic or pandemic disease. The current COVID-19 pandemic has largely benefitted from supercomputers: supercomputers have been used for example to simulate studies related to vaccine research and defeat the spread of the virus. With its vast computing resources, LUMI can address different research challenges even faster than before. In addition, it will enable addressing totally new types of scientific challenges combining multidisciplinary research and artificial intelligence.

World-class environmental sustainability and energy-efficiency
As a carbon-neutral data center, LUMI helps the European ICT sector in becoming greener and more cost-efficient, which is a necessity for reaching EU’s ambitious climate targets and paving the way for the green transition. CSC’s data center in Kajaani is among the world’s most eco-efficient: it uses 100% renewable energy produced with hydropower. LUMI’s waste heat will be used in Kajaani’s district heating network: 20% of the area’s yearly district heating needs will be covered with LUMI’s waste heat.