Successful LUMI access for the climate community in EOSC-Nordic

This article was originally published on the EOSC-Nordic website

EOSC-Nordic does calculations on the new pre-exascale supercomputer, LUMI, through one of the chosen Norwegian pilot projects for the new HPC system in Finland.

From October 2021 until April 2022, EOSC-Nordic scientist Anne Fouilloux and her team have access to LUMI and use it to do calculations for the climate use case in the EOSC-Nordic project.
“The main tools for climate scientists are so-called “Earth System Models,” which run on High-Performance Computers like LUMI. Running high-resolution climate models can provide better insights for climate impact studies, and this requires a lot of computational resources,” she says. 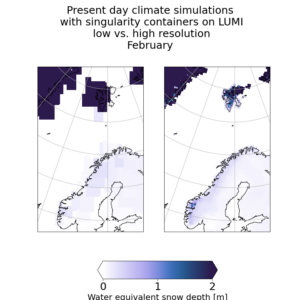 An EOSC-Nordic use case

The climate use case is one of the demonstrator projects in EOSC-Nordic and called “FAIR Climate data and software for the Nordics.”
“In EOSC-Nordic, we are working on Open Science and the FAIRification of Climate Tools used in the Nordic countries,” she says.

Both a NICEST-2 and EOSC-Nordic project

The goal is to provide FAIR climate data and tools to all Nordic communities interested in climate science, including those working on climate change mitigation and impact assessment. This use case serves the NeIC project NICEST-2, the second phase of the Nordic Collaboration on e-Infrastructures for Earth System Modeling Tools.

“NICEST2 complements EOSC-Nordic, and within NICEST2, we work on the building blocks of possible EOSC-Nordic services and on how to make climate science more FAIR. So in short, on everything that needs to be done before deploying any services on EOSC,” says Anne Fouilloux.
And it is through this project the use case was included in the Norwegian granted pilot projects to run on LUMI.

“Our goal was to verify our approach and prove that we have chosen the right path and can have FAIR Earth System Models that run efficiently, including one of the most powerful HPC systems,” she says.
The problem is that running the same Earth System Models simulation on various HPC systems generates outputs that can be quite different at particular times and locations while still producing the same results in terms of climate, for instance, at a global scale and over long periods. This “butterfly effect” makes collaborations and reproducible research difficult.
“To make Earth System Models FAIR or at least to increase their FAIRness, we followed FAIR for software principles and standardized the way we package and run Earth System Models with containers, like docker and singularity,” she says.

It is part of the NICEST2 project to enhance the performance and optimize Earth System Model workflows on future computing resources like EuroHPC and LUMI.

“Having access to LUMI as part of NICEST2 is key to demonstrating that the Nordic climate community is capable of running containers efficiently on such large HPC systems. And for EOSC-Nordic, it means that we are ready to deploy Earth System Models as-a-service on the European Open Science Cloud that can use cloud computing, HPC-cloud computing, and EuroHPC computing. Therefore, we are ready for Open Science,” she says.