In the beginning of this month, on the 5th of October, EuroCC National Competence Center Sweden (ENCCS), for the first time, organized the Swedish HPC Business Day face-to-face event in collaboration with its third-party RISE and PDC – Center for High-Performance Computing at KTH. The event was a big success and attracted 16 companies and public organizations. At the event, the participants shared their experiences and wishes of using HPC. They described the advantages of using HPC for their businesses and discussed the hurdles they face connected to the lack of hardware, lack of experience with HPC application software, and legal aspects. The attendants were a good mixture of participants who already had a vast experience of using HPC as well as those who would like to use it and are exploring the possibilities. Below we highlight some of the presentations during the event.

Love Börjeson, director of KBLab, the Swedish National Library, presented their work on a new generation of artificial neural network models for language understanding. KBLab’s models serve as a way to transfer the full potential of KB’s collection to the Commons, thereby contributing to the digital transformation of society, and ultimately supporting high-quality research and democratic development. Dr. Börjeson mentioned that to be able to analyze 17 billion parameters for the current model architecture, KBLab need a very large HPC system such as Vega, and the next step of analyzing 175 billion parameters models would be possible only through access to such large systems as the upcoming LUMI system in Finland. KBLab is the first public administration in Europe that successfully applied and received access to the EuroHPC JU systems thus putting Sweden on the front line. Dr. Börjeson expressed his gratitude to ENCCS for proposing and assisting KB-Lab in its successful journey on the Vega system. 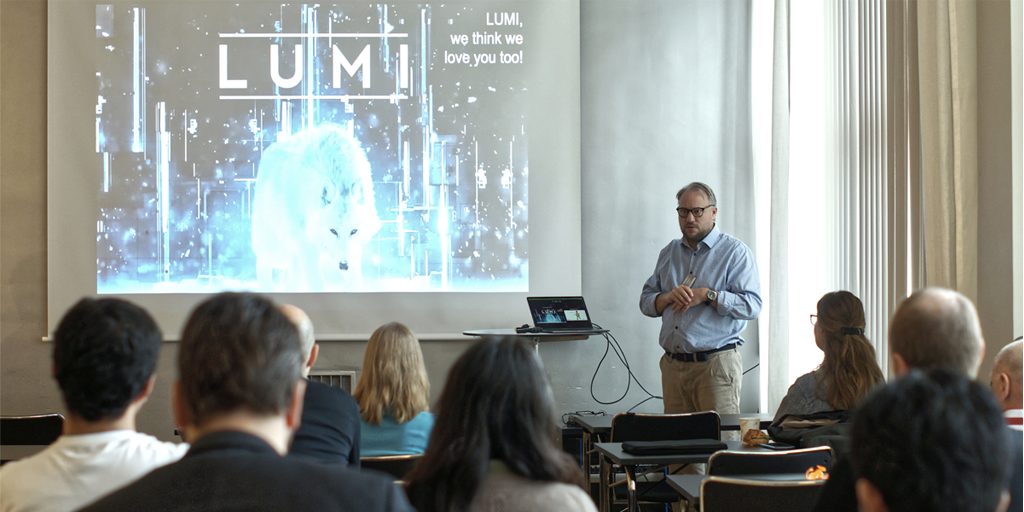 However, KB-lab was not the only organization ENCCS assisted in using HPC. Another presenter at the event was NorthVolt AB, currently making amazing progress in environmentally friendly battery production. With The help of ENCCS, NorthVolt AB is the first company accessing the EuroHPC JU systems in Europe to optimize in silico the main components of a cell battery: anode, cathode, electrolyte, and membrane. Matteo Ambrosetti, advanced material engineer at NorthVolt AB, proudly presented the progress they made in their battery research since accessing the Vega system in Slovenia and emphasized the importance and cost efficiency of HPC.

Mattias Chevalier from Scania AB presented the results of their fruitful 10 years of collaboration with PDC HPC center at KTH. Since 2011, Scania has been investing in the portion of the HPC systems that PDC has been purchasing and running during these years. Scania highly appreciates the HPC system access at PDC and the support given by PDC to them. It is critical for Scania to have this opportunity and with this substitute many experiments with simulations, thus decreasing the costs drastically thanks to HPC.

OHB Sweden AB is another company using PDC services for satellite data storage from the Odin project and other satellites. Stefan Lundin, project manager at Odin Mission Control, explained that Odin’s aeronomy program scans the Earth’s limb somewhere between 6 to 110 km. OHB Sweden’s and PDC collaboration started about 20 years ago and is still considered a valuable collaboration.

Voxo AB and EnginZyme AB are two SMEs that are using HPC in their research. Voxo AB is developing speech to text AI model to be used, for example, in analyses of customer service calls. In order to train and further develop this model Voxo AB with the assistance of ENCCS has successfully applied for the SHAPE program launched by the PRACE EU project tailored specifically for SMEs. Currently, ENCCS experts support Voxo AB in the enhancement of their software to efficiently use HPC. EnginZyme AB, on the other hand, is exploring the possibilities of creating new enzymes, which are crucial for helping, for example, nurturing industries or cosmetic industries to modernize their productions towards more environmentally friendly processes. With the help of ENCCS, EnginZyme has been using the HPC systems in their simulations through the PRACE EU project.

Another interesting AI project on HPC systems is being done by Trafikverket in collaboration with KTH. In this project, ENCCS supports enhancing the software to analyze the traffic on the south E4 highway in order to minimize the pollution caused by the traffic through its optimization.

The event was summarized by Lars Gustafsson, program manager at Vinnova, who presented different socio-economical areas in Sweden where Vinnova has many projects towards digitalization. In these areas, digital transformation is of high importance and acts as a trigger for many SMEs and organizations that currently heavily invest in developing machine learning methods to analyze data and use HPC for method training.

Up to one-fifth of the computing resources of the LUMI supercomputer are available for companies. Read more about LUMI’s benefits for companies.